If you’ve ever been to a stadium, ballpark, or entertainment venue, you’re familiar with vendors yelling and walking up and down the stands with hawking trays peddling hotdogs, popcorn, cracker jacks, and beer. But how did this tradition get started, and why is it so embedded in baseball culture? 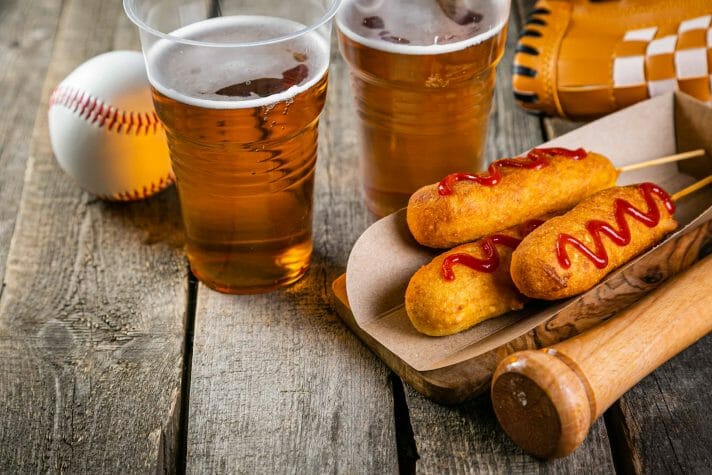 Hawking is the practice of selling something by outcry or carrying items for sale from place to place. We don’t know for sure when hawking came to stadiums and theaters, but we know that sports, spectators, and food vending go as far back as the Roman empire. Archaeologists have found the remains of bakeries, fast food stands, and other concessions in the ruins of Roman gladiator stadiums. Spectators were known to chew on salted chickpeas while watching the midday execution.

The modern-day ballpark experience can be attributed to Harry Mozley Stevens. Stevens was a Londoner who moved to Ohio and fell in love with baseball. Stevens first started hawking new and improved scorecards at baseball games.

“I hit upon the idea of selling scorecards in the Tri-State League. Gee, but I was some barker. It makes me laugh to look back upon those days,” Stevens recalled in a 1915 interview. “I went through the stands shouting at the top of my voice. I can make myself heard now, but in those days – well, can you imagine?” (baseballhall.org)

A keen observer, he also saw the demand for snacks at ballparks. So he founded a stadium concessions company, securing contracts to supply refreshments to several major league parks across the country. At the time, traditional ballpark food was sandwiches and beer. During the late 1800s, there was a steady influx of German immigrants. The nation had a growing appetite for the new dachshund sausages, traditionally served with a milk roll and sauerkraut. 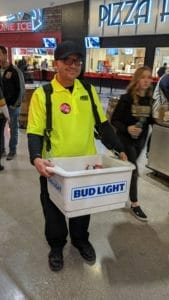 Rumor has it that ice cream and drinks weren’t selling well on a cold day at the grounds where the Giants played. So Stevens bought a bunch of sausages and buns and started selling them instead. His stadium vendors began yelling about “hot dachshunds” for sale.

As the story goes, a cartoonist for the New York journal didn’t know how to spell “dachshund,” so he called them “hot dogs” in his cartoon, and thus the modern “hot dog” was born. By the early 1900s, Stevens was operating concessions for most Major League stadiums. His standard menu of hot dogs, soda, beer, ice cream, and peanuts soon became synonymous with baseball.

According to the Ohio Historical Society, concession vendors first started appearing in the stands around 1906. For the most part, the job has remained relatively unchanged over the last 100 years. The convenience of spectators not needing to leave their seats for a beer or a drink is one of the main reasons why stadium hawking has stood the test of time.

Today, we see some ballparks and stadiums add mobile ordering to their offerings – allowing customers to purchase merchandise and food straight from their phones. However, these advancements still require food and beverages to be promptly delivered to the customer’s seat.

Hawking solutions like our mobile hawking cart can be used as a point of sale or as a hawker support cart. Strategically placed hawking distribution carts allow hawkers to conveniently and quickly replace trays. Stadium vendors love the Gallery Carts Hawking Tray, which keeps beverages cold without ice making it lighter and is ergonomically designed to be more comfortable than traditional hawking trays.

Our revolutionary, environmentally-friendly hawking products may be the right solution for your venue. Download our hawking products brochure below, or contact a sales team member to learn more.